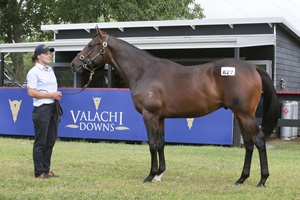 Local trainer Graeme Rogerson maintained an active but somewhat low-key presence during the first days of the annual New Zealand Bloodstock National Yearling sale as he quietly went about acquiring a slew of well bred youngsters for his loyal client base.

However any ideas of flying under the radar evaporated quickly during the afternoon of day four as he set the leading price to date for the Select Sale when he outlaid $300,000 for a stunning O’Reilly colt offered as Lot 827 through the Valachi Downs draft.

From Rhythm mare Darcey Bussell, the colt is closely related to champion New Zealand galloper Silent Achiever who numbered four individual Group One titles amongst her 10 career wins including the 2012 New Zealand Derby and the prestigious BMW Stakes in Sydney.

Rogerson was succinct in his summing up of the colt’s many attractive features.

“Plain and simple he is a natural athlete and a magnificent animal,” he said.

“I saw him several times before the sale and each time he just caught my eye. He’s from a great home as the stud know how to breed a good horse so I was confident he was the colt I wanted most from the sale.

“I think the only thing wrong with him is what I had to pay to get him.”

Rogerson indicated he didn’t have owners in place for the colt as yet but was confident that wouldn’t take long to settle.

“I have a great bunch of clients and I’m pretty sure there will be plenty keen to take a share,” he said.

“I’ll split him up into four or five shares and they should get snapped up fairly quickly.”

Rogerson and wife Debbie secured a total of nine yearlings at an aggregate $1.425million during the Premier Sale and have added a further nine to date from the Select Sale sessions. – NZ Racing Desk