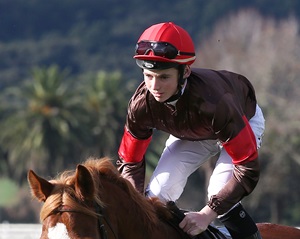 Dedicating himself fulltime to a career as a jockey could see Hamilton's Ryan Elliot competitive in next season's national apprentice premiership.

A winning double at Tauranga on Wednesday again put the spotlight on one of the rising stars of the apprentice ranks, the 17-year-old now having ridden 18 winners in a short career.

While Elliot is approaching his third season as a rider, he has mixed riding with school work before moving to Hamilton permanently where he is based with trainers Graeme and Debbie Rogerson.

Now his focus is completely on developing his skillset as a jockey and accumulating wins.

"At Rogersons, there's a mechanical horse in the tack room and I've been going up there three days a week and I'm finding that's really helping me push horses out. I've got my strength in my pushes."

Elliott set himself the goal of riding 20 winners this season, but in his first full season of riding next term he hopes to dramatically increase his win score.

To achieve that, Elliot would need around 80 wins, an ambitious target considering this year's champion apprentice Shaun McKay is on the cusp of getting his 70th win for the season.

"I'm growing my network of connections and I'm getting stronger all the time. That extra strength is helping me ride out my finishes," he said.

"This season has gone really well. I'm starting to pick up a few more rides here and there. Graeme's helping a lot and Jim Pender has been a big supporter too."

Elliot’s rides at Avondale on Friday are Palacio, Domerova, Lucror Festinatio, Scholes, Princess Raaj and El Luchador, while his rides at Te Rapa are Don’t Be Cheeky, Mossomak, Quaintrelle, Casillas and Doubtless Princess.

“She won well at Te Teko and backed up really well at Te Rapa. If I can get her the right trip, I think she can be winning again,” Elliot said. - NZ Racing Desk.