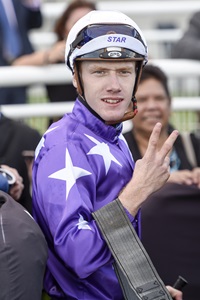 He may have just made history but Sydney-based Kiwi jockey Rory Hutchings' focus is firmly fixed on the road ahead.

With just one meeting remaining of the Sydney metropolitan season, Hutchings cannot be caught in the race to be champion apprentice for the season.

Hutchings, who completed his apprenticeship at the beginning of June with 32 wins for the season, has a 10-win buffer on Koby Jennings, meaning he becomes the first New Zealand jockey to win apprentice titles in two countries.

"It's quite a big thing when you think about the great New Zealand apprentices who have ridden before me," said Hutchings, who joins champion Sydney-based Kiwi jockey James McDonald as a four-time champion apprentice.

"It's my first season of being here and after the suspensions I had, it's pretty amazing when you think about it. I wasn't really even thinking I was a chance for the first half of the season but the back half of the season was really good.

"I got my weight under control and that meant I was able to build momentum. Before that I'd get momentum but then get suspended and that momentum would stop. Once I was out there riding regularly, the winners began to flow."

Hutchings, who has 341 New Zealand wins to his credits, counts his Group wins on Burbero in the Gr.2 Missile Stakes and aboard Amovatio in the Gr.3 Hawkesbury Cup as racetrack bright spots but says winning the apprentice title is his main season highlight.

Since coming out of his time, Hutchings has added a further six city winners and taken his overall New South Wales tally for the season to 52, achieved at a strike rate of a win to every six rides.

"Nothing has changed except that now there's no A [for apprentice] next to my name. It's helped that Hughie [Bowman] and Tommy [Berry, both regular Waller riders] haven't been here but I've still had had support from the other trainers in Sydney too."

Hutchings' goal for the 2016-17 season is to continue to consolidate his position among the leading jockeys in Sydney and with that achieve 50 city winners.

He has two mounts at Rosehill on Saturday that he believes have Group potential, the John Sargent-trained Esteban, who chases his fourth straight win, and this season's Gr.2 Avondale Cup winner Sacred Master, now with Waller having transferred from Cambridge trainer Tony Pike.

Hutchings rode Sacred Master in a recent Randwick trial and was thrilled with the performance, though he wasn't counting his chickens on keeping the ride next season.

"He went really well in that trial and I'd love to stick with him right through but Chris does change his jockeys quite a bit." - NZ Racing Desk.