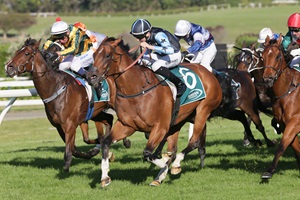 Consistent mare Volks Lightning could be headed back to Ellerslie on New Year’s Day for a Group One challenge after she gained a deserved victory at the venue on the weekend.

The four-year-old mare powered home to defeat a quality line-up of rating 75 rivals over 1200 metres in one of Saturday’s qualifying heats for Ellerslie’s new Boxing Day feature, the Dunstan Feeds Rising Stars Championship.

Stakes placed twice at Group Three level as a three-year-old, Volks Lightning was registering just her second career win.  However co-trainer Graeme Rogerson, who prepares the mare in partnership with wife Debbie, believes she is now ready to further enhance her record over the summer.

“She has been wonderfully consistent but I think she has come of age now,” he said.

“Her owners have been very patient as she has needed the time but Debbie and I both think she is a good horse.

“She ran sixth in a hot field at Te Rapa last time in the Listed sprint and didn’t really cop the track that day. She needs good ground to show her best and she got that on Saturday.

“It was great ride by the young boy (Ryan Elliot) and she went a good time so we think she can be competitive at the higher levels.”

That opportunity could come around on New Year’s Day with the mare nominated for the Gr. 1 Sistema Railway although Rogerson acknowledged she would need to secure another victory before then to strengthen her chances of gaining a start in the feature event.

“We’ve got her nominated for both the Railway and the Telegraph but she probably wouldn’t make either field on her rating at this stage,” he said.

“We’re hoping we can get another win before then so we might sneak into the Railway field. There have been plenty of upset results in that race so we could be another if she can get a start.”

Rogerson also advised Saturday’s Gr. 2 Wakefield Challenge Stakes winner, Gift of Power, would be heading for a week long break at Cambridge Stud before returning to the stable in preparation for a tilt at the Gr. 3 Barneswood Farm Eclipse Stakes (1200m) at Ellerslie on New Year’s Day. – NZ Racing Desk