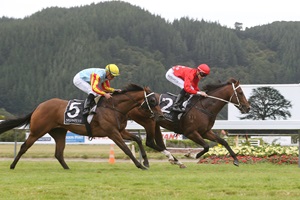 It’s no secret the regard that Graeme Rogerson has for Ferrando and he was again singing the three-year-old’s praises at Trentham.

“I’m aiming him at the big sprint race at The Championships in Australia – I think he’s a super horse,” said the Tuhikaramea-based trainer, who prepares the gelding with his wife Debbie.

The Gr.1 Darley T. J. Smith Stakes, a 1200 metre event that features Black Caviar, Takeover Target and Chatauqua on its honours board, will be run at Randwick on April 1.

Ferrando has a distance to go to warrant any comparisons with that trio, but he is making impressive progress and Saturday’s success in the Zephyr Consulting Premier was his third from just five appearances.

Hong Kong interests were also keen on the son of Fast ‘N’ Famous earlier in his career before Rogerson fended off the offers by putting together a syndicate to buy the horse and keep him in his stable.

“We paid a lot of money for him, but I think he’s a Group One horse,” he said.

Ferrando settled in second spot and after hitting the front 300 metres from home he was hotly challenged before he drew clear under stable apprentice Ryan Elliot.

“They are both going places, the horse and young Ryan - that was a great ride.  He was just kidding them,” Rogerson said.

Ferrando was strong over the closing 50 metres to comfortably account for O’Rachael with Barcelo a game third.

“It was either lead or trail and I was able to take a sit,” Elliot said. “He’s a really nice horse and still a bit green, but he’s on the way up.” – NZ Racing Desk.