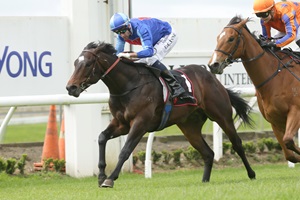 Raceday debutant Masque lived up to his trainer’s expectations when he delivered a winning return over 800 metres in the first race at Pukekohe today.

The trial winning Savabeel two-year-old showed plenty of ticker for rider Leith Innes as he shouldered his way through a narrow gap against the rail to claim the lead halfway down the long Pukekohe home straight. Despite knocking off a little at the post the colt had enough in hand to hold out the finish of race favourite Queen Of The Air, who chased him doggedly in the closing stages.

Co-trainer Graeme Rogerson, who prepares Masque with wife Debbie, was feeling bullish about his future prospects after success in the northern regions first juvenile event for the season.

“He had trialled enormously and we think he is the next Savabeel,” he stated.

“We were going to go to Sydney with him but he’s been working on wet tracks and it’s pretty dry over there.”

Rogerson had been confident of a win on debut after rider Leith Innes had been fulsome in his praise when combining with the colt for his first run at the Te Teko trials back in August.

“Leith rode him at the trials and said this is a Group horse,” he advised.

“We will probably go to the Wellesley Stakes at Trentham and then on to the Karaka Million after that.

“He’s the one we put a nomination in for the Golden Slipper and he’s showed me as much as Savabeel at this stage.”

Bred by Gary Chittick, Masque is the full brother of successful racemare Costume who numbered the Gr. 1 Herbie Dyke Stakes and Gr. 1 Livamol Classic amongst her six career victories. He was a $200,000 purchase for Rogerson from the Waikato Stud draft during the premier session of the 2017 New Zealand Bloodstock Yearling Sale series. – NZ Racing Desk