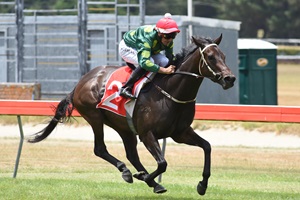 Speedy filly Gift Of Power is on target for a Group One meeting with the older horses.

Trainers Graeme and Debbie Rogerson are keen on a tilt at the Sistema Railway (1200m) at Ellerslie on New Year’s Day and the three-year-old provided a confidence-boosting performance on Saturday.

The daughter of Power and the Group One performer Capital Diamond produced a slick effort at Trentham to win the Kamada Park Premier (1000m) in a canter.

“She’s in the Railway and we’ll see how she comes through this and that’s the way we’ll head,” said part-owner Bailey Rogerson. “She’s a horse with a very special place in my heart.”

Rogerson, a grand-daughter of Graeme, signed for Gift Of Power at Karaka in 2016 for $180,000 and has subsequently formed a special bond with the filly and rode her in a lead-up trial at Matamata last month.

“That was a buzz being on her, a big thrill,” she said.

On Saturday, Gift Of Power returned to the form that 12 months ago saw her claim the Gr.2 Wakefield Challenge Stakes (1200m), in which she beat subsequent Group One winners Hasahalo and Melody Belle, on the course.

She jumped away well to sit in third spot and hit the front under rider Chris Johnson with 400m to run and glided clear to win untested by two lengths from Euphoria.

Johnson has no doubt the filly can rise to the Railway challenge.

“With no weight on her back she could run some time,” he said. “She’s quite well-named, she’s got a lot of power.

“She’s obviously a very good sprinter, she strode up to them and then flattened out nicely.”

Gift Of Power’s performance saw her Railway odds cut from $41 to $21.

She was bred by Sir Patrick and Justine Lady Hogan, who remain in the ownership, and under their Cambridge Stud banner will offer a half-brother (Lot 88) by Per Incanto during the Book 1 Sale at Karaka next month. – NZ Racing Desk.