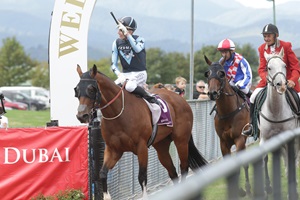 Speedy mare Volks Lightning was rewarded for consistency and good attendance when she landed the Listed gavelhouse.com Lightning Handicap (1200m) at Trentham on Saturday.

The Team Rogerson-trained mare has been around the mark in a host of stakes races and added a Listed victory to an earlier Group Three success to ensure her residual value is maximised.

“She deserved this. She has been miss consistent all the way through,” Bailey Rogerson said.

“She has been a constant in these Group and Listed races and it was good for her to get the win today.

“I think the owners are looking to head to the Gold Coast (Broodmare) Sale this year, so now that they have picked up that Listed win it looks good on the page and she is very valuable.”

Raced by the Vermair Volks Lightning Syndicate headed by cricketing legend Brendon McCullum, Volks Lightning boasts a Group One placing in the Railway (1200m) and has won six of 34 starts, with a further ten placings.

Rogerson was also pleased with the effort of five-year-old entire Ferrando.

“It was a very good run,” she said. “He will head to the paddock now for a good spell and come back next season.”

“She’s been scratching for one all season and it is really well deserved to get this win,” Elliot said.

“Normally she can get a little bit fiery over the first 600m, but with blinkers on she was actually a little bit quieter.

“You just have to hold her up as long as you can and she was actually quite electric with the blinkers.”

The win was the second on the card for Team Rogerson after four-year-old gelding Comeback made it successive wins with victory in the opening event of the day. – NZ Racing Desk