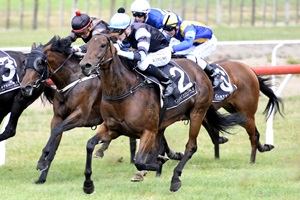 Consistent performer Pasabache once again outlined her love affair for the Tauranga racecourse when she scored her fifth victory at the track on Saturday.

The Team Rogerson-prepared six-year-old was coming off a creditable performance for fifth in open company at her last start as she defeated a small but competitive line-up of fillies and mares in the rating 82 NZB Insurance Pearl Series Race over 1300m.

Settled back in mid-field by rider Ryan Elliot, Pasabache travelled sweetly as pacemaker Honneur Noir set a solid speed up front. Elliot moved the Shocking mare into contention on the point of the home turn before unleashing her at the 300m.

Pasabache surged to the front in the closing stages to defeat La Mia Stella with Honneur Noir fighting on gamely for third.

Elliot was full of praise for the mare’s effort after her trainer’s had decided to bypass a start in the day’s feature event, the Gr.2 Windsor Park Stud Japan NZ International Trophy (1600m) later in the programme.

“She loves this place down to the ground,” Elliot said.

“Graeme (Rogerson) was debating whether to run in the Group Two today or the 1300m. I’m glad he stuck to the 1300m as she won that well.

“She didn’t disgrace herself last week (in open company).

“This week I was able to bring her back a couple of positions and just travel up on the corner and she’s really let down.”

Raced by Denise Howell, Pasabache has now won nine of her 57 starts and over $159,000 in prizemoney after being purchased by Howell for just $500 at the 2014 National Weanling Sale at Karaka.