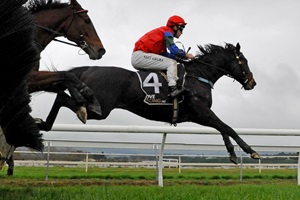 The Montjeu gelding showed his prowess over the fences when winning his hurdle debut at Te Aroha last August before finishing fourth in the Great Northern Hurdles (4200m) in just his second jumping start.

This season the eight-year-old was expected to play a major role in the hurdle features and demonstrated he will be a force to be reckoned with as he led throughout to score a hollow victory in the hands of Matthew Gillies.

Despite being taken on by fellow open-class flat performer Jochen Rindt for most of the contest, Gillies was in no doubt he had his rivals well-covered the further the race went.

“It was effortless really,” Gillies said.

“Emily (Farr on Jochen Rindt) keep kicking up and taking me on but he wasn’t having any of that.

“He kept pulling himself up there and I didn’t want to get stuck back on the fence.

“He’s done a great job to finish off and I didn’t really ask him to be fair, so it was a really really good effort.

“He was doing his own thing and I didn’t need to push him as he was travelling that well.”

Gillies made it a memorable double for the day when he claimed the second of the day’s jumping features aboard the Kevin Myers-trained Gagarin in the LJ Hooker Manawatu Steeplechase (4200m).

Gillies bided his time on the Pentire gelding who has been in good form this winter including a runner-up finish in the Waikato Steeplechase (3900m) back in May.

Sent forward to join issue with the leaders at the 1000m, Gagarin found plenty in the run home as he out-stayed a brave Zedace who had been in or near the lead throughout the contest.

“He was outstanding as I just thought I would bide my time out the back,” Gillies said.

“I thought I’d ride him like Jo Rathbone or Isaac (Lupton) would (although) I’ve never actually ridden a race like that so Kevin (Myers) should be impressed as I think that is the best ride I’ve ever ridden for him.

“He’s just a gutsy horse as he didn’t quite like the ground but it was just his heart and fitness as he dug in that last 200m.”