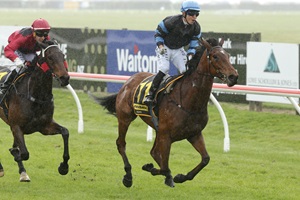 In just his first full season of riding and with just one winner under his belt, 28-year-old apprentice Joshua Kam secured the biggest moment in his fledgling career when he guided $43 outsider Sweet Treat to victory in Saturday’s Listed Staphanos Classic (1950m) at Rotorua.

Unable to claim any of his four-kilogram allowance due to the conditions of the stakes race, Kam gained the ride on the Team Rogerson-trained mare after several other riders had turned down the mount.

Not that that bothered Kam as he produced a heady effort to guide the Ekraar six-year-old home with a rails-hugging ride, holding out a wall of horses headed by Opaki visitor Charlie Horse and the Stephen Marsh-trained Strolling Vagabond.

“It was a good win as she is a funny little girl,” Graeme Rogerson said.

“I was just talking to Jo Smithies (part-owner) and told her I offered the mount to about eight other jockeys and they all said they would get a better ride.

“She was carrying 53kgs and he (Kam) couldn’t claim but he did what I asked him and I think the little bit of wet ground helped her.

Kam was having trouble keeping a broad smile of his face as he spoke about the victory on the track where he had scored his only other success when winning aboard Ottavio back in July.

“I have so many people to thank, the owners and Graeme and Debbie (Rogerson), for giving me the opportunity.

“I was real nervous before the race but I’m just stoked.

“She jumped out great and was travelling real good. I wanted to go out three-wide in the straight but there was an opening just off the rail, so I thought she was travelling good enough so we went up there and she got me home.”

Bred by the Smithies family under their Monovale Holdings Ltd. banner, they share in the ownership of Sweet Treat with long-time Rogerson staff member and stable supporter, Denise Howell.

A daughter of Royal Academy mare, Flinders, Sweet Treat is a younger half-sister to the stakes placed Ezra and from an extended family that includes a number of well performed European gallopers including her granddam Eternal Reve who won at Group Three level in Ireland. – NZ Racing Desk