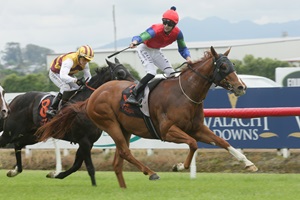 “He pulled a plate off in the run in the J Swap Stakes (Gr.3, 1400m) last start and we will just freshen him up for the Telegraph.”

The four-year-old has won six of his 15 starts and has been placed on four occasions, however, all of his victories have come when racing left-handed.

Meanwhile, the Tuhikaramea stable is likely to be represented by De La Terre and Arancia in the Gr.2 Jamieson Park Eight Carat Classic (1600m) at Ellerslie on Boxing Day.

Arancia finished second to Mongolian Wings over 1400m on Saturday and Rogerson believes she has a future over ground.

“I think she has the makings of a nice filly. She looks like an Oaks filly. She was very unlucky at Tauranga, she went for a run and it just closed on her in the straight,” he said.

“She hit the front a bit soon at Te Rapa but she went a nice race.”

De La Terre finished runner-up to highly promising three-year-old Brando at Te Rapa last start, but all four of her career wins have come at that venue and Rogerson is unsure whether the filly will get out to a mile.

“She was unlucky at Auckland twice, but we will see whether she gets a mile,” Rogerson said.

“You can’t judge her really on her Christchurch run (when tenth in the Gr.1 New Zealand 1000 Guineas). She had to sit on the tarmac for several hours the day before and that took its toll.

“If she runs up to her trackwork, then she’d be very competitive.”

Other leading performers to follow over the Christmas and New Year period from the Rogerson stable include Beauden, who will look for a confidence booster in Wednesday week’s Taupo Cup (2000m).

“The Taupo Cup will be a nice race for him and then he’ll go to the Marton Cup (Listed, 2200m), which is a race he won last year,” Rogerson said.

“His blood wasn’t 100 percent after his last run, he had a low-grade virus. We’ve freshened him up and he’s working well.”

Progressive three-year-old Edge Of Wonder will contest the Gr. 2 SkyCity Auckland Guineas (1600m) at Ellerslie on New Year’s Day, having caught the eye when a strong fourth in the Listed Trevor Eagle Memorial (1500m) behind Tellall.

“I think he’s a Derby horse in the making,” Rogerson said of the son of Tavistock.

“He’s a late foal and he certainly looks the part.” – NZ Racing Desk