Rogerson: From seaside to trackside 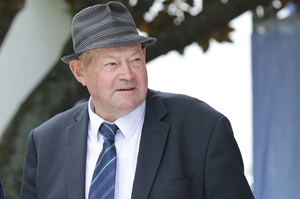 Get yourself to the Chatham Islands, that’s the message from Graeme Rogerson.

The Hamilton trainer has just spent a week on the archipelago, 800 kilometres east of New Zealand’s two main Islands, with former top jockey Jimmy Cassidy, and their wives.

“Anybody who hasn’t been there should go there,” Rogerson said.

“We just went over and had a chat at the pub, Hotel Chathams, and met the local people. They had organised crayfish and blue cod, it was great.

“A few Chatham Islanders bought shares in some horses as well.”

Never far away from racing, Rogerson was able to visit the local track where he hopes to line-up a few horses in the coming years.

“I am sending a couple of trotters over to race at the Chatham Islands races,” he said. “The gallopers have got to be there six months ahead. I will send some to their Bicentennial Cup in two years, it’s two miles.

“I am not allowed to train down there but I will definitely own a horse in the Bicentennial.

“They have got a beautiful racecourse there.”

Rogerson spent a week on Chatham Island and he said he is keen to return and take in Pitt Island, the second largest island in the Chatham Archipelago.

“We were there for five days and we had a ball,” he said. “I wasn’t able to get to Pitt Island but I will definitely go there on my next trip.”

Rogerson has returned in time to watch a handful of his team, which he trains in partnership with his wife Debbie, race on Cambridge’s synthetic track on Wednesday.

Well-bred four-year-old Alegre will by vying for back-to-back wins in the NZB Pearl Insurance Race (1550m) after winning on the same course and distance a fortnight ago.

“She is a lovely mare who has just taken time,” Rogerson said of the daughter of his former Group One winner Soriano.

“I thought she would win the other day and everyone in the world backed her.

“It’s a Pearl Series race, otherwise she would be racing in the mile and a quarter, but she will run really well.”

Stablemate Capellani will be out to improve on his last start runner-up result when he contests the Go Racing 2000, while Rogerson is excited about the jumping prospects of Suffice to Say, who will line-up in the Dave Snowden’s Legacy – Cambridge Grains 2000.

“We have got a really good steeplechaser, Suffice To Say,” Rogerson said. “I am trying to get him ready for the Hawke’s Bay Steeples. He is a good horse.”

Suffice To Say will utilise apprentice jockey Bailey Rogerson’s four-kilogram claim, and Rogerson said his granddaughter is in for a big winter.