Pinn keeping his feet on the ground after Group One triumph 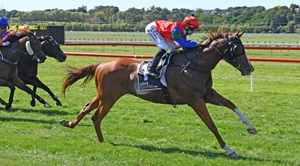 Apprentice jockey Wiremu Pinn was back at work on Sunday in his boss Daniel Miller’s Matamata stable less than 24 hours after securing his biggest success in the saddle aboard Mascarpone in the Gr.1 El Cheapo Cars WFA Classic (1600m) at Otaki.

The 23-year-old Pinn provided a glimpse of his prodigious talent as he dictated proceedings on the Team Rogerson-trained five-year-old and used good judgement to angle to the best strip of ground in the home straight to allow the showy chestnut to finish off powerfully in the closing stages.

“Any race is a good race to win, but a Group One is very special and something I think every rider aspires to win,” Pinn said.

“I’m very thankful to Mr Rogerson for giving me the ride and having faith in me to do a good job.

“I was pretty confident turning for home as he had jumped well and got into a nice rhythm where he felt comfortable.

“He practically towed me around the bend, but I wanted to get him out wider on the track as that was where they seemed to be winning earlier in the day.

“He ran strongly through the line and I took an age to pull him up, so he might be able to go over a bit further in the future.”

Pinn is one of the most naturally gifted apprentice jockeys going, with a balance and poise rarely seen in those so early in their riding career, particularly given the once troubled South Auckland teen didn’t come from an equine background.

But talent only takes you so far, and Pinn acknowledged it hasn’t been smooth sailing during his apprenticeship to date and he has only recently returned to riding following a lengthy suspension.

He is determined to make a go of his riding career as he looks to the future and the opportunities available if he can maintain a level-headed approach to his riding and life in general.

“There are probably too many people to thank that have helped me out and got me to where I am today,” he said.

“I don’t really want to single anyone out but I’m grateful to Mason Stevens, who has been doing my rides for me, as he does a great job.

“I’ve managed to ride for a number of trainers and if I can keep winning races like the one on Saturday then I’m hoping that will lead to getting even better rides.

“My goal on Saturday was to stay calm and ride to instructions, just like any other race.

“That is the key to my riding and my life as well as I just want to keep my head down, stay out of trouble and make the most of the opportunities I do get.

“I’m a natural lightweight, walking around the 50kg mark and I’m feeling healthy and strong.

“I’m proud of what I have achieved so far, but I know if I can work hard over the remaining two years of my apprenticeship there will be real rewards to come.

“Some of the riders who are at the top of the game at the moment may not be still around in a few years and that is where I want to be able to step up and fill those big shoes in the future.” – NZ Racing Desk