Rogerson believes he may have found his next champion 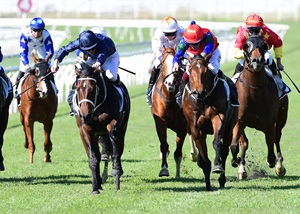 A margin thinner than a pencil line separated the Graeme and Debbie Rogerson-trained two-year-old Sharp ‘N’ Smart from victory in Saturday’s Listed The Phoenix (1500m) at Eagle Farm on Saturday, however co-trainer Graeme Rogerson believes his charge can go one better in this weekend’s Gr.1 JJ Atkins (1600m) at the same venue.

The strapping son of the stallion Redwood, who stands at Sharp ‘N’ Smart’s part-owner Gerry Harvey’s Westbury Stud at Karaka, has Rogerson of the view he is primed to go all the way to the top and the JJ Atkins is the stepping-stone to greater riches in the future.

“I think this horse could be one of the best I have ever trained and when Hugh Bowman came in after riding him on Saturday, he said to me he has the potential to be a very good horse,” Rogerson said.

“Things didn’t go his way on Saturday as he is a big, raw-boned horse who was having just his third start, so he didn’t have the ringcraft of some of his rivals.

“Hughie said he just coasted along, but when he asked him, he went through his gears effortlessly.

“He got a bit of shove in the straight that cost him, although I still thought he had won until they showed the photo finish.

“He really is a remarkable horse who has an amazing temperament and just likes to take everything in.

“When he got to the track yesterday, he stood there staring at all the marquees and the people, but he never turned a hair.”

Rogerson had been confident of a good showing despite his charge only having a quiet trial at Avondale on May 10 after winning the Listed Champagne Stakes (1600m) at Pukekohe on April 23 at just his second start.

“He is a beautiful winded horse who doesn’t take much to keep him up to the mark,” he said.

“His work during the week had been enormous and after the race he would hardly have blown out a candle.

“We took him home and he ate up and this morning he had half an hour on the water walker and he is as bright as a button.

“Hugh Bowman is going to ride him again in the JJ Atkins and I think he will be very hard to beat.”

Bookmakers are of the same opinion, with Sharp ‘N’ Smart a $7 third favourite for Saturday’s juvenile Group One behind vanquisher Political Debate ($3.50) and former Western Australian two-year-old Sheeza Belter ($4.20), an impressive winner of the Gr.2 Sires’ Produce Stakes (1400m) for Peter and Paul Snowden.

Rogerson has fielded plenty of offers for the gelding who he purchased from Harvey’s Westbury Stud draft for $55,000 during the Karaka Book 1 sale in 2021.

“I really like the Redwoods and this guy caught my eye at the sale,” he said.

“We put him in the New Zealand Bloodstock Ready To Run Sale last year and put a $100,000 reserve on him. He had breezed up well but no-one was that interested in him, so I was happy to take him home with me.

“Gerry wanted to stay in, and I put a few of my mates in as well and here we are.

“I can tell you there is plenty of interest now and the offers have been enormous.

“I don’t think I have ever been offered that much money for a horse, but I had a talk to the owners again this morning (Sunday) to see if they wanted to sell fifty percent, but they are adamant they want to keep him and race him.

“He will have the run this weekend and then come back home for a spell before we get him ready for the spring.

“The world is his oyster and when he learns to race, he could be anything.”

74-year-old Rogerson, who is known worldwide for his training achievements through the deeds of horses like Gr.1 Cox Plate (2040m) winner and now sire sensation Savabeel and Gr.1 Melbourne Cup 3200m) winner Efficient, admits the thoughts of having another champion on his hands is what gets him bouncing out of bed each morning.

“We have a really good set up at home where we have around 70 in work and while Debbie (wife) and I are over here my granddaughter Bailey is running the ship back at home,” the Hall of Fame trainer said.

“She is doing a great job and Debbie and I are enjoying ourselves over here in Brisbane.

“Debbie is doing most of the work, she is doing the training and I’m doing the advising and we love being here.

“With the whole COVID pandemic we haven’t been able to get here at all for the last three years and I just hope it continues to ease up as I know we want to bring more horses back here, just like plenty of other Kiwi trainers want to as well.

“We know we breed good horses in New Zealand and they can compete in the best races here so why wouldn’t we want to be here.

“We have a really nice team of young horses coming through and the one thing I have learnt in my years in the game is that you just never know where your next good horse is coming from.”

While Rogerson hasn’t landed a Group One victory across the Tasman since sending out the Queensland Oaks-Derby double in the space of a week in 2011 with Scarlett Lady and Shootoff, the stable has been around the mark and he would dearly love to share an Australian elite level win with wife Debbie.

“We haven’t won a really big race here for a few years now, so I’m hoping Sharp ‘N’ Smart is the horse to fix that.

“If I could do that with Debbie then it would make for a pretty special occasion.” – NZ Racing Desk