Rogerson hoping special visit a portent for a successful spring 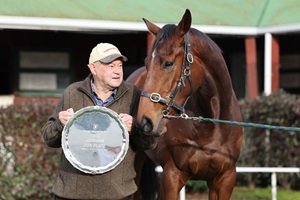 Trainer Graeme Rogerson hopes a special visit by officials from the Moonee Valley Racing Club to his Tuhikaramea property in Hamilton on Sunday afternoon is a good omen for the spring prospects of exciting galloper Sharp ‘N’ Smart.

The Melbourne visitors brought along the winning trophy for this year’s running of the iconic Gr.1 W.S. Cox Plate (2040m), with Rogerson, who trains in partnership with wife Debbie, keen to make it a permanent fixture at home if his rising three-year-old son of Redwood can make it to the race on October 22.

Rogerson has tasted Cox Plate success once before, winning the race in 2004 with another three-year-old at the time in Savabeel, who is now writing his own legacy as New Zealand’s champion stallion from his Waikato Stud base.

The veteran trainer believes Sharp ‘N’ Smart has the potential to take out Australasia’s premier weight-for-age contest, having oozed quality in his four starts to date, which included a breath-taking victory in the Listed Champagne Stakes (1600m) at Pukekohe, before a two-start Brisbane campaign.

Beaten a pimple in the Listed The Phoenix Stakes (1500m) by Political Debate, Sharp ‘N’ Smart raced in restricted room when beaten into fourth in the Gr.1 JJ Atkins (1600m), going down by less than a length to Sheeza Belter.

“I guess dreams are free, but I have said all along he (Sharp ‘N’ Smart) is a very good horse,” he said.

“We took him to Queensland recently and he had no luck when finishing fourth in the JJ Atkins, but that trip has been the making of him and he looks magnificent.

“He had three weeks out in the paddock up there and a week in Sydney before coming home and he will come back into the stable on Monday morning.

“He had his picture taken with the Cox Plate trophy today and then the hard work starts tomorrow on getting him through to the race.”

Rogerson has two other potential Group One targets in mind for the laid-back gelding and is currently mulling over the travel plans and campaign details required before deciding which way to go.

“We really wanted to have a crack at the Spring Champion Stakes (Gr.1, 2000m) in Sydney with him as well as the Cox Plate, but they are on the same day this year,” Rogerson said.

“It’s really a matter of working out where to get him started on his way to those races,” Rogerson said.

“I would think it is unlikely he will race in New Zealand before he goes to Australia, but we need to work out if we send him directly to Sydney or take him to Melbourne.

“We are also taking a horse called Whitby as a travelling partner for him.

“He is also by Redwood and he was working with Sharp ‘N’ Smart before he went shin sore and we had to put him away.

“He is a pretty smart customer himself, who I think can win races over there if he comes up like he was before we had to spell him.”

Rogerson also reported that the potential sale of talented three-year-old Smart Rocks had fallen through and he would take his place in the final of the ITM/GIB 3YO Winter Championship Series (1600m) at Ruakaka this Saturday.

“We had a number of offers for Smart Rocks and we thought we had him sold to Hong Kong, but the money never came through,” he said.

“He hasn’t missed any work so he can head to Ruakaka this Saturday for the final of that three-year-old series.

“He won pretty impressively up there last time so I’d like to think he is a good chance to repeat that effort.” – NZ Racing Desk