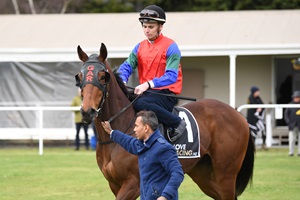 A variety of Australian features remain in the mix for highly regarded three-year-old Sharp ‘N’ Smart, who has already made an impact across the Tasman.

The son of Redwood performed with merit during last season’s Queensland winter carnival and co-trainer Graeme Rogerson has yet to lock in a spring program to take care of unfinished business in Australia.

Sharp ‘N’ Smart was narrowly beaten into second in the Listed The Phoenix (1500m) before he returned to Eagle Farm to finish fourth, and less than one length off the winner, in the Gr.1 JJ Atkins (1600m).

He had earned his first trip away after claiming the Listed Champagne Stakes (1600m) at Ellerslie off the back of a debut second at Ruakaka where he cost himself victory by ducking in twice in the closing 150m.

Sharp ‘N’ Smart continued his build-up toward the spring at Taupo today and wasn’t pressured and ran home under his own steam into third for rider Ryan Elliot in an open 1100m trial.

“He’s in good order and I’m happy with him, it was just a bit short for him,” said co-trainer Graeme Rogerson, who shares in the ownership group that also includes breeder Gerry Harvey.

“I’ve got to decide now where I’m going to run him on September 10, he’ll have one run in New Zealand before he goes to Australia.”

Sharp ‘N’ Smart will make his sole domestic appearance in either the Listed El Roca – Sir Colin Meads Trophy (1200m) at Hastings or an age group event over 1400m at Ruakaka.

Rogerson, who trains with wife Debbie, has also yet to lock in the path to be followed in Australia.

The other option Rogerson will discuss with his co-owners is to target the Caulfield Guineas (Gr.1, 1600m) as a way of earning a start in the Gr.1 Cox Plate (2040m) with a possible Derby tilt to follow.

Meanwhile, the other open trial at Taupo was won by the Vadamos mare La Crique who will resume in the Gr.1 Tarzino Trophy (1400m) at Hastings on Saturday fortnight.

“I’m very happy with how she is progressing and the timeline ahead of her. She is coming to hand nicely and today’s trial was encouraging,” co-trainer Katrina Alexander said.

“Craig (Grylls) was really happy with her as well and it was quite good to see her control the speed, she was happy to relax when told and kick at the end.”

The multiple Group winner was spelled following her second in the Gr.1 New Zealand Derby (2400m) and has returned in fine order.

“She has grown and has come up in front and she is carrying more condition than what she did last preparation,” Alexander said.

“It would be nice to start the Hawke’s Bay carnival on decent footing and our mare had a good hit-out today.”

Safely through the Tarzino, La Crique will head to Australia and while the A$10 million Golden Eagle (1500m) in Sydney is a tempting target, she is more likely to head to Melbourne where the Cox Plate would be her dream grand final. – NZ Racing Desk