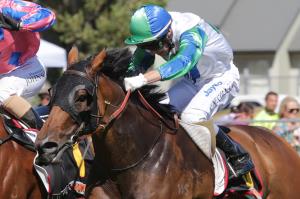 Two high-profile racing families celebrated a memorable victory at Te Rapa with a mare who crowned her rapid rise to the top with Group One success in Saturday’s Herbie Dyke Stakes.

Costume coped admirably with a rise in weight and distance to claim top honours in the familiar Waikato Stud colours for breeder-owner Garry Chittick and trainers Graeme and Debbie Rogerson.

“I said to Garry I thought we could win the Thorndon and then run at Te Rapa – I’ve got so much confidence in her,” Debbie Rogerson said.

“She’s a very, very good horse and to get a Group One is great. She’s by Savabeel, who we trained, so it’s all pretty emotional.”

Costume had won a Rating 75 event at Trentham in January and a week later she beat all but A Touch Of Ruby in the Gr.1 Thorndon Mile when carrying 52kg.

“I’ve always had a lot of faith in her and she had no luck as a three-year-old and not that much as a four-year-old,” Rogerson said.

That all changed at Te Rapa where Costume sat back off the pace and finished off strongly in the straight under rider Michael Coleman to win by the barest of margins from Shuka with The Solitaire third ahead of Zurella.

“Shuka drew level at the 100 and she really dug deep,” Coleman said. “She’s a tough mare who has come a long way in a short time – she’s just kept on improving all the way through.

The Matamata-based Coleman has now ridden 32 winners at the highest level and he is confident he can add to that tally in the future with Costume.

“It’s my fifth win in this race, my first was when it was a Group Two back in those days, and this won’t be her last Group One,” he said. The strongly supported Historian was being niggled at to hold his place a fair way from home and he dropped out to finish last with a wide run taking its toll on the three-year-old Aspen, who was back at the tail with him. – NZ Racing Desk.