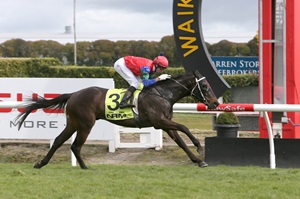 The apprentice provided the master with words of encouragement in the lead-up to Colonel Carrera’s timely return to top form at Te Rapa.

At his previous appearance when resuming at Rotorua in the hands of teenager Ryan Elliot, the five-year-old had finished runner-up and he went one better in Saturday’s Bupa Care 1600 for senior jockey Leith Innes.

“He’s a good horse and my young fellow rode last time when the horse hadn’t had a trial and he got off him and said he would win his next start,” co-trainer Graeme Rogerson said.

“I think he is a cups horse, he just needs a bit of luck in the running. He’s by Duelled and they only get better with age, he’s on the way up and hopefully he’s still going after Christmas.”

A previous winner on the course and second to Puccini in the Gr.2 Waikato Guineas, Colonel Carrera raced in behind the pace and he dashed home along the fence to score by two and three quarter lengths.

He is raced by Rogerson and his long-time friend and stable supporter Max Whitby and they also enjoyed an early strike in the central districts at Otaki where the Savabeel filly Fierte made a winning debut.

Successful at the Te Teko trials earlier this month, she dug deep to account for Stormy Ray in the Iffraaj, NZ’s Champion 3YO Sire Maiden.

“She’s tough and hunted the other one down nicely,” rider Kelly Myers said.

Rogerson and Whitby later completed a hat-trick with Lucky Edie, who they race with Westbury Stud’s Gerry Harvey, after he beat the older horses at Te Rapa in the Jorja’s 12th Birthday 1400.

“He’s a very, very good horse in the making – just wait until the 2000 Guineas,” Rogerson said. “I wanted to run him today to give him three weeks before the Wanganui Guineas.”  – NZ Racing Desk.