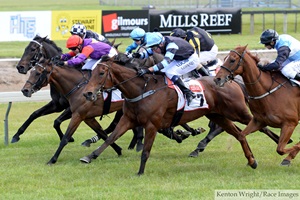 Graeme and Debbie Rogerson were out of Group One luck at Riccarton, but it wasn’t long before they were served a generous measure of compensation.

“That’s the way racing goes and she is a very, very good mare – she should have won at Auckland as well,” Graeme Rogerson said.

He was referring to Soriano’s effort for third in the Gr.3 Sofitel Luxury Hotels Stakes at Ellerslie where she suffered a chequered run in the straight.

The Savabeel mare has two Group One wins on her record and Rogerson is keen to give the six-year-old the chance to advance her record at that level in the coming weeks.

“She got served by Pins but she was empty so we sent her back and they are going to test her next week to see if she’s in foal,” he said.

“I might look at the Captain Cook Stakes and there’s the Zabeel Classic, but we’ll see how she comes through this race first.”

Soriano was settled toward the back of the field at Tauranga and when a gap presented itself in the run home she powered through under veteran rider Grant Cooksley.

In a driving finish, Soriano got home by a short neck from the favourite Kawi, who was held up in the straight, and Julinsky Prince was only a short head back in third. Survived was doing his best work late to finish a close fourth. - NZ Racing Desk