Soriano too sharp in mares’ feature 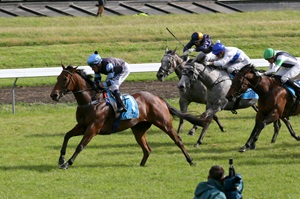 Soriano’s class and versatility were showcased at Avondale where the mother-to-be added another major title to her record.

A dual Group One weight-for-age winner over 2000 metres, she had no trouble dropping back to 1400 metres to add the Gr.2 Auckland Thoroughbred Breeders’ Stakes to her CV.

Saturday’s victory came just seven days after the Savabeel mare had blown her rivals away over a mile in the Gr.2 Tauranga Stakes and a field that contained five top flight winners.

Trained by Graeme and Debbie Rogerson, Soriano is raced by her breeder Denise Howell whose long-time friend Cherry Taylor stepped in to handle the post-match honours.

“Denise is so thrilled and proud of her, she’s such an amazing mare,” Taylor said. “Graeme said to me at the sale a couple of days ago that he wasn’t worried about the drop back to 1400 metres.”

Soriano returned a positive test to Waikato Stud stallion Pins earlier in the week and she will have further Group One opportunities before she is retired.

The Rogersons are keen for the mare to defend her titles in the Zabeel Classic at Ellerslie on Boxing Day and in the Herbie Dyke Stakes at Te Rapa before she heads for the broodmare paddock.

Soriano was ridden by veteran jockey Grant Cooksley, who had also partnered her at Tauranga, and they settled at the back of the field.

They were still a long way off the pace on the turn, but once Cooksley angled the six-year-old into the clear she let down strongly to win going away by two and a half lengths.

Queens Rose, whose price nearly halved from $26 when the track deteriorated to a Dead 6, ran on well for second ahead of last year’s winner Kelly O’Reilly, who is safely in foal to Tavistock. Ultraviolet missed the jump and cut the corner to take fourth money. – NZ Racing Desk.