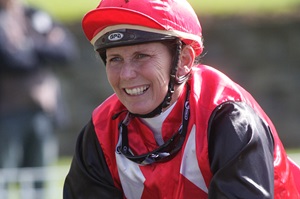 Michelle Northcott is going into battle in foreign territory on Saturday.

Northcott, who trains from the Hamilton property of her father-in-law Graeme Rogerson, will saddle runaway last-start winner Dualis in the Gr.3 Lawnmaster Eulogy Stakes at Awapuni.

It will be just the second time in her 18 years of training that Northcott has had a runner in a stakes race and the first time she has produced one at Group level.

Her previous stakes runner was Sir Hawk, who she produced in Listed company when she took over the training of that stayer for her grandparents Ron and Melva Northcott.

There's something of a family theme happening too with Dualis, raced by Northcott's parents Graeme and Marise, who also bred the filly.

"I thought I was being a bit cheeky even putting her into the race but it's basically come up as a Rating 65 field and she definitely deserves her shot," said Northcott, an accomplished amateur jockey and driver.

Parkes has switched to Canterbury vistor Honor That for the Eulogy, with Northcott engaging apprentice Leah Hemi for Dualis.

"She was impressive at Wanganui and the horse she beat has gone on to win last Sunday," Northcott said.

Northcott has entered Dualis for the Gr.1 New Zealand Oaks at Trentham next March and has thoughts about taking in a southern Guineas campaign before then with the Listed Gore Guineas on January 23 a possible forerunner to starts in the Listed Dunedin Guineas and Listed Southland Guineas in February.

"I was beginning to think she might be more of a sprinter because she didn't want to rate herself in her races, but we've changed her bit and added a tongue tie and now she's racing a whole lot better, so we'll just see how far she can take us," Northcott said. - NZ Racing Desk.