Torba delivers in style at Trentham 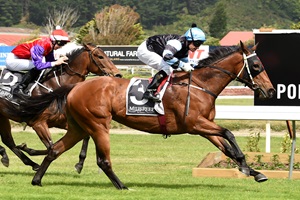 Progressive mare Torba proved her young trackwork rider’s judgement was spot on when she delivered her third win in just four starts with a comprehensive victory at Trentham on Saturday.

The four-year-old Elusive City mare is ridden in her work by young Bailey Rogerson who told her grandfather Graeme, who prepares the mare in partnership with wife Debbie that her charge was ready to win on the weekend after an impressive workout on Tuesday morning.

Rogerson was quick to incorporate that assessment into the firm riding instructions for pilot Darryl Bradley before the race after admitting he was unhappy with Bradley’s ride on the mare at her previous start.

“I told Darryl that Bailey had said she could win but I also told him he needed to sharpen up on her after his last effort,” he explained.

“She is a mare that needs to have things her own way in a race and I felt Darryl had tried to fight her last time which proved her undoing. To his credit he listened and produced a gem of a ride on Saturday.”

Rogerson is delighted with the progress shown by the mare who he rated “just a horse” a little over three months ago.

“I didn’t really think that much of her initially but Bailey has said all along she would win races,” he explained.

“She got beaten at Ruakaka back in October and I said then that we might be able to win a nice maiden with her so we took her down to Riccarton where she won on both the first and last day of the carnival.

“That trip was the making of her as she has thrived since then and I don’t think she has finished winning yet. There is a $50,000 special maiden at Ellerslie on New Year’s Day and another on Karaka Million night that we’re going to have a shot at.

“If she keeps going like she has then we’ll look for a black-type opportunity which could be at Tauherenikau in their Breeders’ Stakes race for the fillies and mares in February.”

Torba is raced in the familiar colours of long-time Rogerson employee Denise Howell who had quality mare Soriano produce the run of the race for third in the Gr. 1 Captain Cook Stakes on Saturday. Soriano will now head to the Gr. 1 Zabeel Classic at Ellerslie on Boxing Day for her next assignment. - NZ Racing Desk