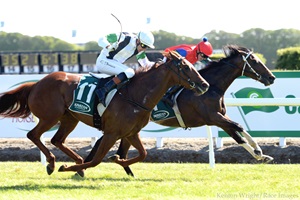 Pocket battleship Francis Drake returned to his favourite track on the weekend to register his fourth career victory in gallant fashion when he clung on in a desperate finish to the Print House 1600, the last race on the card at Te Rapa on Saturday.

The four-year-old son of Tavistock was coming off the back of a somewhat disappointing showing at Otaki at his last run where he finished a lacklustre seventh after winning well at Te Rapa prior to that.

“He didn’t get all the luck at Otaki but I think we probably miscalculated a little as I was a little easy on him after that Te Rapa win in early November,” admitted co-trainer Debbie Rogerson.

“In hindsight he may have needed that one so we kept him up to the mark and he showed what he is capable of on Saturday.”

Ridden patiently by apprentice Lee Magorrian, Francis Drake settled nicely in midfield during the early stages of Saturday’s contest before improving along the rail to issue his challenge at the 300 metre mark. Magorrian slipped the gelding clear as the challengers appeared out wide and clung on for a gutsy win from the fast finishing race favourite Skyweka who closed to within a nose at the winning post.

“He’s not very big but he’s very game so to hold them out under 59kgs was a super effort,” remarked Rogerson.

“He got a lovely run along the rail but when they came at him he stuck to his guns. He always tries his heart out which is all you can ask for.”

Rogerson will let the dust settle before deciding on the next step for her charge who now finds himself in an awkward position in the ratings.

“He will probably get enough points to take him out of the 75 grade so we will have to see where we can get him into a rating 85 over the next few weeks,” she said.

“He’s not really built to carry the big weights so going up a grade will help however you have to be able to get a start to take advantage of that.”

Rogerson is looking forward to the upcoming Ellerslie Christmas carnival where class performer Soriano will be the stable’s star attraction.

“Soriano is absolutely flying so we’re expecting a big run from her in the Zabeel Classic,” she said.

“We have several others targeted for races during the carnival but she will be our flag bearer.”

Soriano is the defending champion in the Zabeel Classic having defeated Saturday’s Manawatu Cup winner Weregoingtogetcha in the 2014 edition of the Group One feature. – NZ Racing Desk