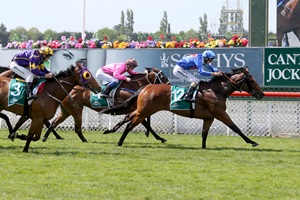 Maritimo will chase the second black type victory of her career when she returns to the central districts on Saturday.

The Pins filly will take on the males in the Gr.3 Higgins Concrete Manawatu Classic at Awapuni following her bold last-start placing in the Gr.3 Sunline Vase.

“She didn’t carry on to the Oaks, we didn’t think she would get the extra distance,” said Debbie Rogerson, who prepares Maritimo with her husband Graeme.

“She was very, very good last time out and we’re really happy with her. She has really developed into a lovely filly.”

Maritimo has fashioned a tidy record up to 1600 metres and she has also now excelled in two runs beyond a mile with a second placing in the Listed Oaks Prelude over 1800m preceding her third in the Sunline Vase over 2000m.

She was ridden on both occasions by Jonathan Parkes, who also won the Listed Wellesley Stakes on Maritimo last season, and he takes the ride again. He has tipped her as his best winning chance at Awapuni.

The Rogersons will also be represented by Volks Lightning in The Oaks Stud 3YO Premier and Sanasar in the Gr.3 Kamada Park Awapuni Gold Cup.

“She’s doing really well and her next aim after this will be the Cambridge Breeders’ Stakes at Te Rapa,” Debbie Rogerson said of Volks Lightning.

Sanasar was third in the Wairoa Cup two runs back before winning the Waverley Cup where he beat the dual stakes winner and race rival Just The Tip. – NZ Racing Desk.