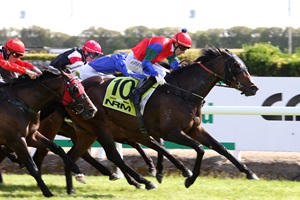 Star filly Serena Miss is a supplementary entry in next month's National Broodmare Sale on the Gold Coast.

The dual Group Two winner and Group One-placed filly was supplemented to the catalogue last week after failing to flatter in a trial at Cambridge.

Prepared by Hamilton trainers Graeme and Debbie Rogerson, the daughter of Iffraaj has won three of her 10 starts for a big group of owners that includes Debbie Rogerson and Graeme Rogerson's granddaughter Bailey.

"A couple of owners wanted to breed from her but she's worth that much money that it makes sense to put her through the sale and that way everyone's happy,” Rogerson said. “She'll be put through to dissolve a partnership."

"She's a high-class racehorse and we think she'll go just as well as a broodmare," Rogerson said. - NZ Racing Desk.