Sarten challenge for highly-regarded 3YO 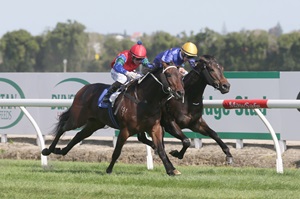 Graeme Rogerson isn’t in any hurry with his classic hope Ichiban.

The Tuhikaramea trainer believes he has a serious three-year-old prospect on his hands and he is happy to let the son of Swiss Ace have all the time he needs.

“He had his first gallop on Saturday morning,” said Rogerson, who prepares the gelding with his wife Debbie.

A debut third behind the highly-regarded Ugo Foscolo, he then beat recent winner Barcelo at Te Rapa before he wrapped up his first campaign with a black type victory in the Listed Great Northern Foal Stakes.

“I’m not going to rush him and his first big test will be in the Sarten,” Rogerson said.

The Gr.3 James and Annie Sarten Memorial Stakes will be run at Te Rapa on October 24.

Meanwhile, another 2000 Guineas candidate from the stable will be on show this Saturday at Ruakaka where Ferrando will make his second race day appearance.

He will step up in grade to tackle the Listed Tavistock Northland Breeders’ Stakes following an impressive debut victory at Te Aroha last month in the hands of the promising apprentice Ryan Elliot.