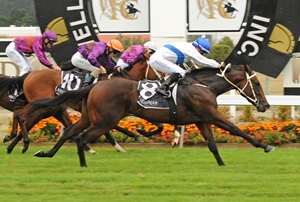 Reminisce has stretched the patience of her connections, but they are confident the lengthy wait will prove worthwhile.

Bred and raced by The Oaks Stud, the four-year-old hasn’t raced since her juvenile season when she won twice for trainers Graeme and Debbie Rogerson and finished third in the Gr.1 Manawatu Sires’ Produce Stakes.

“She went out after the Sires’ Produce and when she came back for the spring she fractured her cannon bone and we got everything right with that before she got a stress fracture of her tibia,” said Rick Williams, racing manager for the Cambridge farm’s owner Dick Karreman.

“We’ve finally got her back again and she’s had a long, slow build-up with Lisa Anderson and she’s been back with Graeme and Debbie for a month.

“She looks very well and she’s a powerful beast. She’s a massive talent and I know that if she comes back to form we’re going to have a lot of fun with her – she’s ready to rumble.”

Reminisce is an acceptor in The Kirton Sprint at Taupo on Friday with a decision on a start to be made on race morning.

“It’s looking like a Good 2 track there at the moment and we wouldn’t be keen on running her on a really hard track,” Williams said.

“She’s also in at Hawke’s Bay on New Year’s Day and they are irrigating the track there.”

A daughter of resident stallion Roc de Cambes, Reminisce is out of the Zabeel mare Animate and The Oaks will offer her brother (Lot 528) during the Select Sale at Karaka next year. – NZ Racing Desk.