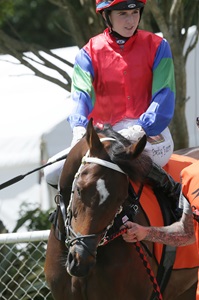 Cups racing is now firmly on the agenda for the improving Tavistock stayer Francis Drake.

The Graeme and Debbie Rogerson-trained five-year-old claimed the Taupo Cup (1950m) two starts back and on Saturday he steps out in the SVS Hamilton Cup (2000m) at Te Rapa.

Rogerson indicated further Cups races were in store for Francis Drake through the remainder of the preparation, but whether that's a Wairoa Cup or an Avondale Cup would depend on how he performs at Te Rapa.

"He's just starting to put it all together now. He's looking good and working well," said Rogerson, a part-owner in the galloper as well.

"He just couldn't get a clear go at Tauranga, but he'll run well this weekend. He always goes well at Te Rapa," Rogerson said.

"He can be a funny horse but Emily [Farr, stable apprentice] knows him now and she's riding him in his trackwork so we've left her on."

"I like Savasava. I think he's a real mile and a half (2400m) horse and we'd like to push on towards the Avondale Guineas and [New Zealand] Derby. He might surprise a few people on Saturday."

Team Rogerson was again active at this week's New Zealand Bloodstock Yearling Sales Series at Karaka, securing more than a dozen horses over the first four days of selling, with a top spend of $375,000 for the Fastnet Rock filly out of their former dual Guineas winner Katie Lee.

"This sale [select] is certainly different to the first two days. Premier was really hard and we got knocked over a fair bit. But we've bought some nice horses and we're happy with our lot," Rogerson said. - NZ Racing Desk