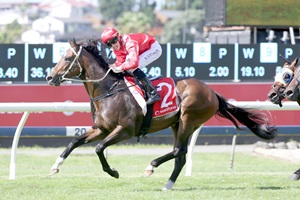 Graeme Rogerson’s hopes of a start at The Championships for Ferrando are fading.

“I’m watching the weather and he’s still in the Arrowfield Sprint on April 8, but I won’t be running him on heavy ground in Sydney,” he said.

“He’s more than likely to run on the 15th in a three-year-old race at Tauranga over 1200 metres and then he could go to Adelaide.”

The South Australian race Rogerson has an eye on is the $A1 million Gr.1 Goodwood at Morphettville on May 20.

Ferrando has won four of his seven starts, including the Gr.3 Mongolian Khan Trophy at Ellerslie before he finished fourth in his first start over 1400 metres in the Gr.2 Wellington Guineas.

“The track was a bit off at Trentham and he’s a 1200 metre horse, he’s definitely up to the best,” said Rogerson, who prepares the colt with his wife Debbie.

Meanwhile, the stable will be well represented at the Rotorua meeting on Friday.

“We’ve got a lot of good chances there,” Rogerson said.

Among them is Sweet Treat, an Ekraar filly who will debut in the Burton Construction 3YO off the back of a trial win on the course earlier this month.

“She’s taken a while to come to it, but she’s getting better all the time now,” Rogerson said.

She will be ridden by the stable apprentice Ryan Elliot, who will also be aboard the barn mate Suffice To Say in the Jakkalberry 1950.  A brother to the capable Suffire, he finished runner-up at Wairoa at his last appearance. – NZ Racing Desk.