Stakes test next for tough 2YO 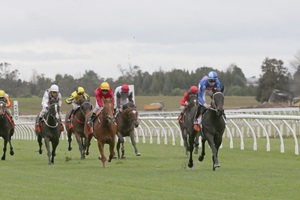 Busy youngster Malambo doubled her winning tally in rapid fashion at Te Rapa to earn herself a crack at the final two-year-old black type event of the season.

She broke her maiden at Arawa Park last Wednesday and on Saturday she added the thick end of the stake in the Clarence Street Pak N Save to her record with stable apprentice Ryan Elliot again in the saddle.

“She never left an oat during the week and Ryan said she had a lot up her sleeve at Rotorua,” said Graeme Rogerson, who trains Malambo with his wife Debbie. “She’ll be set for the Ryder Stakes now.”

The Listed feature will be run at Otaki on July 29.

“She’s a typical Duelled – a lovely quiet type and she’s a very good filly,” Rogerson said. “Ryan is a very good rider as well. He’s got a really bright future.”

Runner-up in three of her first five appearances, Malambo was quickly into stride at Te Rapa to sit on the pace and when Elliot asked her for an effort in the straight she responded in fine style.

“She anticipated the start well and it was easy enough for her to sit outside the leader,” Elliot said.

Malambo hit the front 250 metres from home and she scooted clear to win going away by three and a half lengths.

“She came through the race on Wednesday very well and she’s improving all the time so it’s onwards and upwards with her,” Elliot said.

Pacemaker Le Brassus gave a solid account of himself on debut by claiming second money ahead of the favourite Showtenaire, who got back in the running and made ground fairly without getting her supporters’ hopes up. – NZ Racing Desk.