Career change may have to wait for Francis Drake 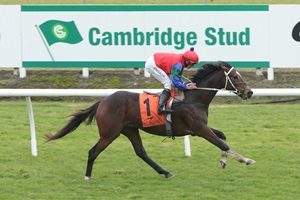 Capable flat performer Francis Drake has a date with a hurdle race somewhere in his future but that may not be for quite some time judging by the performance he put up when winning at Te Rapa on the weekend.

The Graeme and Debbie Rogerson trained five-year-old took out his seventh victory from 38 starts when he ran away and hid from his rivals in the Jumpflex NZ 2100 in the hands of leading rider Chris Johnson. Johnson had his mount travelling easily in midfield during the early stages of the contest before allowing him to slide around to attack the leaders as heads turned for home. Francis Drake quickly took over and dashed clear as he cruised to the line well clear of runner-up Rough Cut who made ground nicely without threatening the winner.

It was the Tavistock gelding’s fifth win at the venue, with the four-length winning margin made even more impressive considering he carried a clear topweight of 61kgs in the event.

Co-trainer Graeme Rogerson surprised many when he commented on the possible future for his charge.

“This little horse is the best jumper I’ve had since Lord Zirito and Jean Rapier,” he announced.

“He jumped 50 hurdles on Wednesday morning and boy can he jump.

“I think that’s his forte.

“I think we will take him overseas for his jumping so hopefully he’s an Australian type of horse with the jumping thanks to his ability on the flat.”

Rogerson was delighted with how the horse had handled the 61-kilogram impost as he pondered on where to take him next.

“It takes a good horse to win with that weight especially when the others are claiming,” he mused.

“We may take him to Ruakaka next week but he’s likely to have to carry 63kgs.

“I might have to put Ryan (Elliot) on with a claim but he’s going great at the moment. He’s really copping it and we might go to the Taumarunui Cup after that.”

Whilst the mount on Francis Drake went to this year’s National Jockey’s Premiership leader Johnson, Rogerson’s apprentice Ryan Elliot also enjoyed a successful day for the team when winning on two-year-old Malambo along with Prodigal Son later in the programme. He was also successful on Central Districts galloper Darci Mac to bring up a winning treble for the meeting. – NZ Racing Desk