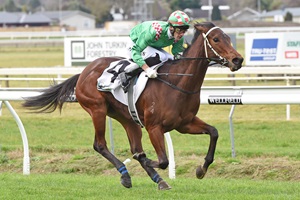 Nuclear Fusion has boosted her chances of a crack at the last juvenile black type event of the season.

Trainers Graeme and Debbie Rogerson were given good reason to aim higher with the youngster when she was untested to win the Rayner Building 2YO at Awapuni on Saturday.

“She’s done a few things wrong, but she is improving with racing and she’s probably been a bit unlucky not to have picked up one before now,” said stable representative Garry Barlow.

The Rogersons have Malambo, who has won her last two starts, set for the Listed Ryder Stakes on July 29 and Nuclear Fusion is now likely to double their hand in the Otaki feature.

Nuclear Fusion wasn’t the quickest into stride at Awapuni before she gathered momentum to sit one off the fence in third spot.

She was out three wide to attack on straightening and the daughter of leading first season sire Power raced clear in the closing 200 metres for a deserved victory, having finished runner-up at her last two appearances at Ellerslie and at Otaki.

“She jumped a bit tardily, but I was able to recover quickly to get a nice trip,” rider Johnathan Parkes said.

“She was always travelling like a winner and she won pretty easily in the end. She’s still learning and she’ll make a nice three-year-old, they’ll have a lot of fun with her.”

Beltoy boxed on well for second with the pacemaker Eva Dawn home for third in front of the well supported Style By Design. He was slowly away and ran home only fairly in the straight.  - NZ Racing Desk.