Rogerson juveniles again in the spotlight 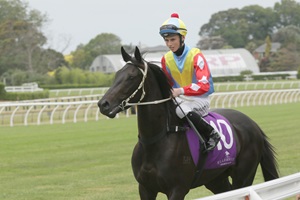 Two-year-old winners have been flowing for Hamilton trainers Graeme and Debbie Rogerson and it could be more of the same this weekend.

The Rogersons will line up juveniles at Ruakaka and Awapuni and Graeme Rogerson has high hopes for success with both.

At Ruakaka, Bullbars filly Contessa Vanessa shoots for three straight wins when she tackles the Tavistock Owners Syndicate 1000, while Nuclear Fusion is a form runner for the Rayner Building 2yo at Awapuni.

On Contessa Vanessa, Rogerson said: "She's going well. She's coming back to 1000m from 1200 and that's not really ideal for her, but I couldn't be happier with her condition. She's going well."

A satisfactory showing from Contessa Vanessa will see her return to Ruakaka for a similar race on July 22.

"She doesn't go that well left-handed. At Rotorua, Ryan [Elliot, stable apprentice] said she wouldn't come onto the right leg, but right-handed at her last two, she's shown what she can do," Rogerson said.

"It looks a race between her and Florence Jean on Saturday. If it was 1200m, I think we'd have that other filly's measure and even over 1000m, she still might beat her."

Power filly Nuclear Fusion has run second at her last two starts at Ellerslie and Otaki and Rogerson was confident he could hold off the double-handed challenge from Cambridge trainer Ralph Manning, who will produce last-start winner Style By Design and impressive trial performer Off The Grid.

"I think we can beat Ralph," Rogerson said.

"If she runs well, she could head to the Ryder Stakes with her."

Rogerson already has one confirmed contender for the Listed Ryder Stakes (1200m) at Otaki on July 29 in Malambo, who followed her maiden win at Rotorua with further success at Te Rapa last Saturday just four days later. - NZ Racing Desk.