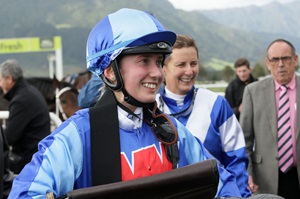 Bailey Rogerson will become the world's youngest licensed trainer when she joins her grandfather Graeme Rogerson and his wife Debbie in a three-person training team on January 1.

Rogerson, 16, will have her first runner at Ellerslie on New Year's Day, including a starter in the Gr.1 Sistema Railway (1200m), as part of the training triumvirate to be known as Team Rogerson.

Rogerson has previously held a licence as an amateur rider, winning twice in that role this season, but expressed delight in getting her training licence rubber-stamped.

"I've always been involved with the horses so it seemed inevitable it would go this way. Being involved as an amateur rider and as a trainer is a win-win situation for me."

"There were always photos of me in the pushchair next to the stalls and I had my first pony at three," she said.

"I'll get the best advice and guidance and if I can be even half as successful as [Graeme and Debbie], I'd be very pleased."

Graeme Rogerson was chuffed to have his granddaughter joining him in partnership.

"I'm really looking forward to it. She's a natural and she works hard. Her knowledge is well beyond her years," he said.

"She's been involved all her life and she rides trackwork and at all the trials and she's currently the leading amateur rider this season. She'll fly."

Team Rogerson is likely to have about a dozen runners at the Ellerslie New Year's Day meeting with the rookie trainer volunteering Railway hopeful Ferrando as the horse she was most looking forward to saddling on her first day.

"We think he's a Group One horse. He won well the other day and he's come through it well. I ride him in all his work at home and I think he'll be a genuine winning chance in the Railway," she said. - NZ Racing Desk