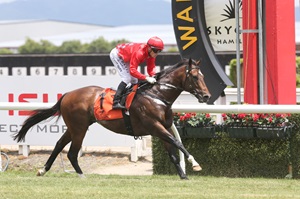 Quality sprinter Ferrando is being set for some big assignments this season, but track conditions will be vital according to Graeme Rogerson, who trains in partnership with wife Debbie and grand-daughter Bailey.

“He’s a dry track horse that can run time,” Graeme Rogerson said. “He can run 1.08 and not a lot of horses can.

“It’s unfortunate when they water the track, he probably can’t win.”

Track conditions permitting, Ferrando will target the Gr.1 Sistema Railway (1200m) at Ellerslie on New Year’s Day and the Gr.1 JR & N Berkett Telegraph (1200m) at Trentham next month before a potential tilt at some Australian sprint features.

“If he gets a dry track Matt Cameron will ride him in the Railway,” Rogerson said. “He’ll head to the Telegraph and then we’ll look at running in some of the big sprints in Australia.”

“I’ve always thought he was good enough to compete in Australian’s big sprints and he is a lovely horse.” – NZ Racing Desk.