Sandrine on target for Eight Carat 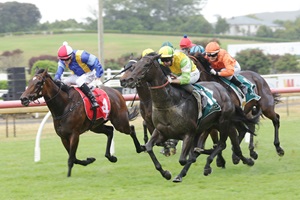 Unbeaten three-year-old Sandrine is to be tested against the country’s best fillies.

Her first test will come in the Gr.2 Cambridge Stud Eight Carat (2000m) at Ellerslie on Boxing Day before a potential tilt at the Gr.1 Al Basti Equiworld New Zealand Oaks (2400m).

“We are aiming her for the Eight Carat and I think she is a pretty good horse,” said Graeme Rogerson, who trains with his wife Debbie and grand-daughter Bailey.

“It will be a big step up on Boxing Day, but she certainly has got the ability.

“She’s definitely an Oaks filly, Debbie has had that in mind (for her) for a long time. We are hoping to head down that track.”

Sandrine maintained her unbeaten record last time out at Ellerslie when she beat the older horses over 1500m.

The daughter of Savabeel sat midfield for the majority of the race before pouncing on her opposition at the 200m mark to win by a length over Ambitious Winner, with a further three-quarters of a length back to Howbowdat in third.

Patience has been the key to her success, according to Rogerson.

“She just keeps doing it and steps up to the mark,” he said. “Debbie has had a very high opinion of her and she is very lucky Joan Egan owns her. I don’t know how many times she has been in and out of work.”

Rogerson is planning to have at least two runners in the Eight Carat field, including Gr.3 Eulogy Stakes (1550m) placegetter Contessa Vanessa.

“Contessa Vanessa didn’t have the best of luck, but she ran well,” he said.