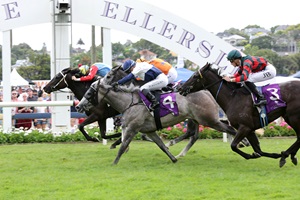 Despite finishing an eye-catching third behind Savvy Coup in the Gr. 3 Eulogy Stakes (1550m) at her most recent run, the three-year-old Bullbars filly was overlooked as a winning prospect with attention focussed primarily on lightly raced Matamata filly Spring Heat and Gr. 1 1000 Guineas (1600m) winner Hasahalo.

Those who took the short odds on Spring Heat were feeling confident as rider Jake Bayliss had a lapful of horse as he angled for a run at the 300-metre mark. Things quickly turned to custard for the favourite as the gap slammed shut and she was badly checked, losing all momentum before running on again to finish fourth.

Just as Bayliss was having his chances extinguished, rider Ryan Elliot was experiencing a similar feeling on Contessa Vanessa who had worked up a full head of steam at the 200-metre mark.

Inconvenienced behind a wall of horses, Elliot searched for a gap that magically appeared at just the right time. Elliot remained calm as he drove his mount through one off the fence to grab a narrow victory from perennial bridesmaid Kapoor who had to settle for her fifth runner-up finish in her last six starts.

“Halfway up the straight I had nowhere to go but she got the split and really lifted through it,” said Elliot.

“She’s a quiet filly who you just have to ask, and she will do it for you.”

Co-trainer Graeme Rogerson was relieved to finally strike some good fortune with the filly who had been unlucky at several starts during this campaign.

“I think she’d have been very unlucky if she hadn’t won today.”

Rogerson will now back the filly up on New Year’s Day where she will tackle the Gr. 2 Stella Artois Royal Stakes (2000m).

“I think she can win the Royal Stakes,” he said.

“The sad thing is Ryan won’t be available to ride her as he’s out, so Chris will be back on her.”

The Royal Stakes is one of six black-type features to be held at Ellerslie on 1 January with the Gr. 1 Sistema Railway (1200m) heading the programme. – NZ Racing Desk