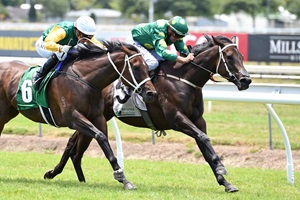 The connections of exciting three-year-old filly Gift Of Power have some big decisions to make about her up-coming assignments after she made it seven wins from just 10 starts with victory at Awapuni on Sunday.

The Team Rogerson trained daughter of Cambridge Stud based stallion Power had showed plenty of talent as a juvenile where she scored three times including the Gr. 2 Wakefield Challenge Stakes (1100m) at Trentham. Spelled after running down the track in the Listed Karaka Million (1200m), Gift Of Power has now won four of her five starts as a three-year-old however Sunday’s victory didn’t come without its challenges.

Facing just the two rivals after the field was devastated by scratchings, including the late withdrawal of Morse Code due to an issue in the starting gates, Gift Of Power showed plenty of tenacity after over-racing in front throughout.

Rider Chris Johnson spent a good deal of the race trying to restrain his headstrong mount who was struggling to find her rhythm in the rating 85 1200m contest. Those problems were exacerbated when the filly wobbled her way around the home bend and was briefly headed by local mare Sweepstake early in the run home.

Johnson remained calm, even after he dropped his whip at the 100m mark, as he urged the filly for a final effort that saw her fend off a gallant Sweepstake by a neck at the post.

“She’s a very good sprinter and I think you saw that today,” said co-trainer Graeme Rogerson.

“She wanted to go a whole lot quicker, which gave Chris a few problems, but when it counted she dug deep.”

Rogerson was delighted with the ride by Johnson who had confided to Rogerson’s grand-daughter and new training partner, Bailey, he had experienced some problems in the home straight.

“He’s special isn’t he as that was a super ride,” he said.

“I asked Bailey what he said when he came back in after the race and he told her he had everything under control as there were still a few gears left at the post.

“He did say she would have given him more if he had hit her with the whip, but he couldn’t as he dropped it with 100m to run.”

Rogerson advised a decision would now be made on the filly’s immediate future which could include a trip to Trentham for the Gr. 1 JR & N Berkett Telegraph (1200m) at Trentham later this month.

“Bailey will have a talk with Sir Patrick (Hogan) and the other owners this week as we do have a couple of options available for her,” he said.

“The Telegraph at Trentham is one option and so is the three-year-old sprint on Karaka Million night.

“We’ve also looked at some races for the fillies and mares in Australia that are coming up as we believe she is more than capable of matching it with them over there.” – NZ Racing Desk