Contessa Vanessa bounces back to winning form at Matamata 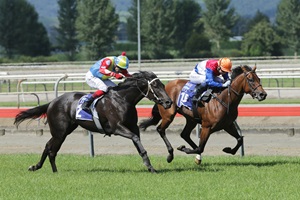 The outstanding season of three-year-old filly Contessa Vanessa continued at Matamata on Saturday when she scored a decisive victory over 1400m.

The Bullbars filly has been a consistent performer for Team Rogerson having taken out the Gr.2 Eight Carat Classic (1600m) on Boxing Day along with producing stakes placings on two further occasions during her current campaign.

Despite finishing well back at her last start in the rich Karaka Million 3YO Classic (1600m) at Ellerslie Contessa Vanessa was sent out a $7 second favourite on Saturday in a race dominated by Gr.1 Levin Classic (1600m) winner Age Of Fire.

Most expected Age Of Fire to be too strong for his rivals as he prepares for an upcoming Australian campaign. That scenario was tipped on its head when the Fastnet Rock colt was forced to settle well back in a muddling run affair as first starter Pop Princess dictated a slow tempo in front.

Rider Lynsey Satherley went for glory on Pop Princess on the home corner however Jason Waddell had stalked her throughout on Contessa Vanessa and wasn’t prepared to give in without a fight. Contessa Vanessa dug deep to issue an undeniable challenge in the closing stages as she forged clear to win by three-quarters of a length from Pop Princess.

Age Of Fire made ground strongly to finish third in a run that will lose him no supporters despite not threatening the first two home.

“I just wanted to give her a good hit-out today as she had a week off after she had no luck at Ellerslie in the Karaka Million,” said Graeme Rogerson after the race.

“The jockey was lucky to stay on her back last time.”

Rogerson now has plans to tackle further black-type assignments with his filly.

“She will go to the Sunline Vase at Ellerslie next and then on to the Oaks,” he said.

“She will be very competitive. She relaxes well and she will stay.”