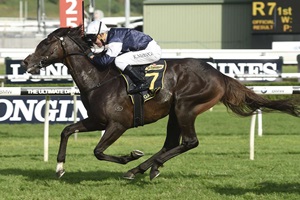 Graeme Rogerson has his eye on training a second Gr.1 Melbourne Cup (3200m) winner after securing a deal to buy ready-made stayers.

Among them is dual Group One winner Gallante, a winner of more than $A2 million from just 20 starts.

The seven-year-old Montjeu gelding holds a nomination for next month's $A2 million Gr.1 Sydney Cup (3200m) at Randwick, a race he won in 2016, though Rogerson was cautious about tackling the April 14 feature.

“He's a proven mud runner. He's unbeaten on wet tracks. We might kick him off at Awapuni on the 31st and then think about whether we go to the Sydney Cup or not,” Rogerson said in reference to the Gr.2 Awapuni Gold Cup (2000m), a race in which Gallante would carry just 55kg in under set weights and penalties conditions.

“Makybe Diva didn't win until she was four so we think this horse might have just needed time as well,” Rogerson said.

“Assign has only had 20 starts and was fourth to Winx in the Turnbull last spring. He's won a Herbert Power. My Bantry Bay is a beautiful big horse and Lloyd said he's always liked him, but he's had a few feet problems along the way.”

Gallante and Assign have already contested three Melbourne Cups between them and Rogerson believes each of his purchases can prosper with the change of environment in New Zealand.

“We flew to Melbourne last Monday and spent the day with Lloyd at Mount Macedon,” he said. “We've bought five horses off Lloyd and we think this will be a great lift for New Zealand racing.

“We've got a couple of genuine Melbourne Cup hopes among them. We're sure these horses will only help our staying ranks. Our Oaks and Derby horses are strong, but our older staying horses are a bit thin on the ground.”

All five horses arrived in New Zealand on Thursday and Rogerson has already sold four of the six shares he is offering in the partnership.

“I've put a partnership together,” he said. “I didn't want to split the five horses up because this way it covers the risk for shareholders if one or two of them don't come up.” - NZ Racing Desk.

Link to photos and pedigrees