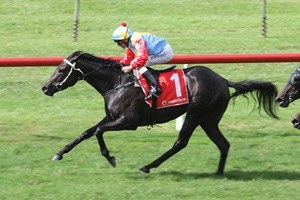 The mount on a leading chance for the upcoming fillies’ classic at Trentham is going begging.

The champion jockey now has to choose between the two for the Gr.1 Al Basti Equiworld Dubai New Zealand Oaks (2400m) in two weeks’ time.

“It’s going to be a tough decision, he was very impressed with Savvy Coup the other day, but that filly was impressive today as well,” Johnson’s agent John Tannahill said.

Trained by Michael and Matthew Pitman, Savvy Coup is the current Oaks favourite at $3.50 while the Team Rogerson-prepared Contessa Vanessa has shortened in to $6.

She was given a perfect ride in the trail on Saturday by Johnson and the daughter of Bullbars then finished determinedly for her fifth success in 17 starts.

The winner of the Gr.2 Eight Carat Classic (1600m) on Boxing Day, she now has 18.5 points in the race for the New Zealand Bloodstock Filly of the Year title.

With the Oaks winner to receive 12pts, Contessa Vanessa can snatch the title from the currently side-lined Dijon Bleu, who has 30pts, with victory at Trentham.

The lightly-tried Gold Spice came off the back of a maiden win at Pukekohe to take second money with her strong finish at Ellerslie with Marcellina another to come from the back for third.

Kapoor took fourth money and the pace-maker Blanco Belle fought on bravely to be the next filly home. – NZ Racing Desk.