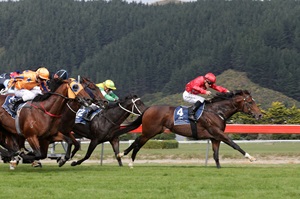 Short course specialist Ferrando has added to his travelling fund ahead of a South Australian venture.

The slick son of Fast ‘n’ Famous won for the seventh time in his 17-start career with a front-running victory at Trentham on Saturday in the Listed Te Akau Racing Lightning Handicap (1200m).

“He’ll go to Adelaide now and run in a weight-for-age race over 1100m and then into the A$1 million Goodwood,” said Graeme Rogerson, who trains the four-year-old with his wife Debbie and grand-daughter Bailey.

“I’d also love to take him to the Everest, that’s worth $A13 million this year.”

Ferrando was quickly into stride under Matt Cameron and after easing clear into the straight he clung on to his advantage tenaciously.

“The track was just a little bit shifty and Matt said he would try to come off the fence a bit,” Rogerson said. “He’s certainly up there with the very best sprinters on dry tracks.”

Ferrando has been ridden in recent starts by Cameron, who was aboard on their last trip to Wellington when third in the Gr.1 Telegraph (1200m).

“He’s a talented horse who goes forward and takes bad luck out of the way,” he said.

“I knew there would be a lot of speed in the race today, but I didn’t expect them to be three and four wide outside of me.

“He took a while to get on his outside leg, but when he got balanced he dug deep.”

Heroic Valour dropped back to last from his outside gate and he finished on strongly for second ahead of Son Of Maher, Akoya and the winner’s stablemate Volks Lightning. – NZ Racing Desk.