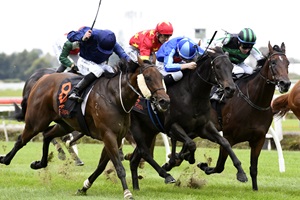 Malambo narrowly prevailed in the Seafood Bazaar 3YO (1200m) at Te Rapa ahead of dead-heaters Merlini and Paulownia with Sistabeel and Prom Queen next to finish.

Less than a length separated the top five and they are all likely to return to the Hamilton track in a fortnight’s time for the Breeders’ Stakes.

Trained by Team Rogerson, Malambo has now won three times on the course and the daughter of Duelled capitalised on a cosy run behind the speed for her latest success.

“It was a tidy field of lovely three-year-olds and she was able to sit behind the pace and come over the top of them, it was a good ride,” stable representative Garry Barlow said.

Malambo, who had finished fifth in a competitive age group at Awapuni in her lead-up outing, finished strongly in the closing 150m to claim major honours.

“We got a nice trail behind Prom Queen, which suited me down to the ground, and she got the job done,” successful rider Ryan Elliot said.

Merlini made the pace and he kicked on gallantly to share second with the last-start Gr.2 Wellington Guineas (1400m) runner-up Paulownia, who hit the line well.

Sistabeel came from last for fourth and Prom Queen gave a good sight to finish fifth in her first appearance since December. – NZ Racing Desk.