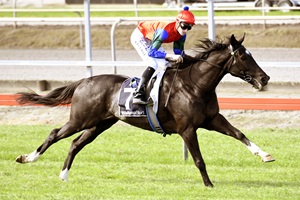 One of the greats of the Australian turf has made a dashing impact in New Zealand.

A son of the three-time Gr.1 Melbourne Cup (3200m) heroine Makybe Diva made his long-awaited debut at Matamata on Wednesday and won in the style befitting of his illustrious parentage.

The Team Rogerson-trained Surrey stepped out for the first time in the Murray Wilcox Ltd Maiden (1600m) and a wide run did nothing to blunt the High Chaparral five-year-old showing a glimpse of the family talent.

“I’ve never had a maiden as good as him,” Graeme Rogerson said. “He’ll probably have two more runs this time and then we’ll see what happens.”

Surrey was among a package of horses Rogerson purchased earlier this year from leviathan Melbourne owner Lloyd Williams.

“Lloyd had him ready two or three times before he backed off and then said to me you’d better take this horse,” he said.

“He might be back over there for the first Tuesday in November – I think he’s that good.”

Surrey, who had won at the Te Teko trials last month, ambled to the front at the top of the straight and he coasted clear to win by two and a-quarter lengths.

“He had big boots to fill and he did that today,” rider Ryan Elliot said.

“He jumped out nicely and I was trapped three wide so I just cuddled him up until the 300m mark. He struggled in the ground and did it all on ability, he’s going to go a long way.”