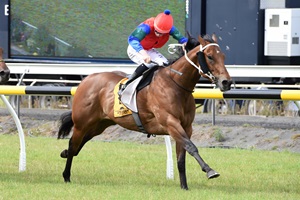 Graeme Rogerson is no stranger to success in Darwin and the internationally-successful horseman has made his mark there again.

His familiar colours were back in winning action on Wednesday when Culzean was victorious over 1100m at Fannie Bay.

“I do race a few around the world and I quite like this horse, but he really can’t get 1200m so I sent him over to Garry Lefoe,” Rogerson said.

“He missed the start and still won. We’ll play it by ear, but I think he’ll go through the grades.”

By Duke Of Marmalade, Culzean broke his maiden over 1100m at New Plymouth when trained by Rogerson and his wife Debbie.

He has campaigned horses in Darwin in the past and has fond memories of his 2003 venture there when he won the Listed Darwin Cup (2000m) with Wild Heart and two open sprints with To Be Fair.

A team of seven horses formerly prepared at Tuhikaramea were transferred to the Northern Territory in May, with five joining Lefoe in Darwin and two sent to Rogerson’s cousin Ken Rogerson, who trains at Alice Springs.

Rogerson’s silks will also be seen at Randwick on Saturday when (Our) Malambo runs in a Benchmark 77 handicap over 1200m.

“She’s a good horse and I’ve sent her to Chris Waller,” he said.

A three-year-old daughter of Duelled bred and co-owned by Rogerson, Malambo has won four times and hasn’t raced since she finished runner-up at Te Rapa in May.

She finished fourth in a recent open trial at Rosehill behind the Group One winner Music Magnate.

Meanwhile, Rogerson has new careers in mind for a pair of Group-winning gallopers in his Tuhikaramea stable.

“Assign and Gallante will be going for their jumping tickets on Friday at Anne Browne’s place,” he said.

“They’re badly handicapped here, they’ve won nearly $3 million between them, so we’ll look at hurdling them.”

The package deal also included Makybe Diva’s son Surrey, who has since won once from three starts.

“He looks tremendous, but he doesn’t like it wet,” Rogerson said. “He’ll kick off in August if we can get a dry track.” – NZ Racing Desk.