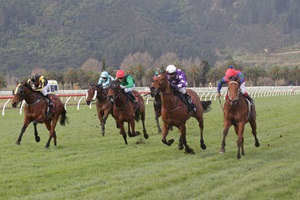 A winning double at Te Aroha followed by a hard-fought victory for class filly (Our) Malambo at Moonee Valley sealed a day of delight for trainer Graeme Rogerson on Saturday.

Rogerson, who operates under the Team Rogerson banner with wife Debbie and grand-daughter Bailey, was feeling quietly satisfied with the team’s results on Sunday morning as he reflected on the previous 24 hours.

“We’ve made a pretty good start to the season with a double last weekend and another one on Saturday,” he said.

“While we missed an opportunity to win the rich maiden race at New Plymouth, Malambo winning in Melbourne certainly eased any pain about that.”

Rogerson was referring to stable runner Sure Bet who found plenty of back luck in running before finishing mid-field in the $101,000 Platinum Homes Taranaki Challenge (1400m). The Reliable Man filly was coming off the back of a top performance at Tauranga with Rogerson quick to forgive Saturday’s effort.

“She just didn’t get any luck and ended up in the wrong part of the track in the run home,” he said.

“She probably should have tracked the winner (Back In A Flash) out wide but she kept getting blocked and didn’t really get a crack at them until it was too late.

“I think she is a real stayer in the making and we have the VRC Oaks as her main spring target. She can go home for a quick break now before we work out a programme to get her to Melbourne for that race.”

Rogerson also believes there is plenty more in store for Te Aroha winners Mutechi and Gallante who impressed in their respective victories.

“Mutechi has really come to it of late and I think she has the ability to go through the grades,” he said.

“She won well at Te Rapa last weekend and we thought that’s where we were going back to until they shifted the meeting.

“She missed the start on Saturday and still went around them to beat a pretty good line-up. She can go back there in a fortnight and will be very competitive again.”

Dual Group One winner Gallante showed he will be a force to be reckoned with in his new role as a jumper based on his competent display to win on debut over hurdles.

“I think he will be a star as a jumper,” Rogerson said.

“He’s won two Group Ones and over $2m on the flat but he just wasn’t showing us that much, so we decided to try him as a jumper.

“He’s been out at Ann Browne’s place and she taught him to jump. He’s been going up that hill there and it has really sharpened him up.

“We are seriously thinking of sending him back to Te Aroha for the Great Northern Hurdle next month although I wish he could have had one more run over the fences before then.

“No matter what happens he is a candidate for all the big jumps races in Australia next year, so we have plenty to look forward to in his new role.” – NZ Racing Desk