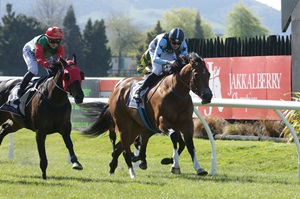 A desperate finish to the Gr.3 Sweynesse Stakes (1215m) at Rotorua was decided by the photo-finish camera in favour of underrated mare Volks Lightning.

The Team Rogerson trained six-year-old claimed her fifth career win when she led all the way to defeat Indecision by the barest of margins in the Group Three feature. It was her first victory in stakes company although she does boast four black-type placings including a third in the Gr.1 Railway Stakes (1200m) at Ellerslie last season.

Rider Jake Bayliss, who had guided the mare to a comfortable trial win at Taupo earlier in the month, was full of smiles when asked to comment on the performance.

“She was really in a happy zone,” he said.

“The plan wasn’t to lead but she jumped away quick and put herself there. She gave a good kick on the corner and gave them something to chase but got a little bit tired in the last 50m.

“She was going in to this fresh so it was a gutsy win.”

Co-trainer Debbie Rogerson was also taken with the effort.

“It was a really good win today,” she said.

“The mare’s going really well for Jake as he rode her at the trials and that was how he ended up on her today.

“This prep she is jumping the gates good and leading easily in a rhythm so that is how we will ride her.

“She got the result although it was a little nerve wracking towards the end.”

Volks Lightning took her career record to five wins from 27 starts with just over $185,000 in stakes earnings. She is raced by the Vermair Volks Lightning Syndicate that is managed by former New Zealand cricket captain Brendon McCallum, who purchased her for $60,000 out of the Windsor Park Stud draft at the 2014 New Zealand Bloodstock Ready To Run Sale.