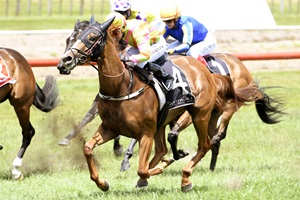 Lightly raced three-year-old Masetto indicated he may have a bright future over more ground when he produced a strong finish to take out the opening event at Tauranga on Saturday.

The Team Rogerson-trained galloper had caught the eye when beating subsequent race-winner Sahar over 1400m at Te Aroha last month.

Despite the nature of that victory, the Cape Blanco gelding wasn’t amongst the major fancies in Saturday’s contest over a similar distance.

Allowed to settle at the rear of the field after a tardy beginning, rider Trudy Thornton went in search of inside runs at the top of the straight but was unable to obtain clear-running until 100 metres from the post.

Once clear, Masetto found another gear to win impressively with well-regarded three-year-olds Hypnos and Spirits Aubeer filling the placings.

“If he had been beaten, he would have been desperately unlucky,” Debbie Rogerson said after the race.

“He has the makings of a very good horse.

“You can ride him back or ride him forward as he is very adaptable.

“I’ve always had a Derby in the back of my mind for him although which one yet I don’t know.

Masetto is raced by David and Elizabeth Olsen who bred him from their talented stayer Passchendaele.

The Montjeu mare won five races, including the Gr.2 Waikato Gold Cup (2400m), while she was also placed on two occasions in the Gr.1 International Stakes (2000m) at Te Rapa.

Rider Trudy Thornton said she was fearing the consequences when searching for a run on Masetto in the home straight.

“I was pretty lucky I won it as I may have had my throat cut if I didn’t,” she said.

“He was a little bit slow into stride but I thought I wouldn’t panic, even though I got out late.

“He’s a horse that is still learning about racing, he’s raw and he’s green but he has a lot of ability.” – NZ Racing Desk