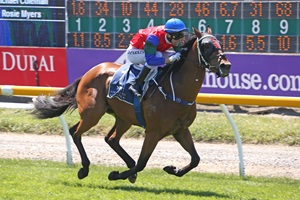 Trainer Graeme Rogerson is hoping for better luck at Trentham on Saturday with tough three-year-old More Wonder set to take his place in the Gr.1 Harcourts Thorndon Mile (1600m).

More Wonder, whom Rogerson trains in partnership with wife Debbie and grandaughter Bailey, finished a luckless fourth in last Saturday’s Gr.1 Levin Classic (1600m) won by Madison County after being held up significantly in the home straight.

Sam Collett will take the reins this weekend, with Rogerson dissapointed with the ride of Lisa Allpress in the Levin Classic and he is addamant his charge should have won.

“He’s a real good horse,” Rogerson said. “He should have won another four or five races, but we look forward and not back.

“He’s back at Tuhikaramea and he looks fantastic, he is a tough horse, a real good horse but he just hasn’t had the chance to show it. I think he was unlucky in the 2000 Guineas (Gr.1, 1600m) where he missed the start.”

Rogerson said the son of Mossman, who will be having his 15th career start on Saturday should handle the quick turnaround to Trentham without issue.

“He is a great doer and is just a tough horse. I like him. He’s a racehorse and he is doing it well. He probably wouldn’t be backing up if he had won last week.”

A $45,000 graduate of the New Zealand Bloodstock Select Yearling Sale, More Wonder is not nominated for the Karaka Million 3YO Classic (1600m).

“We bought him as a trade horse, but a few things fell over so we will see what happens now,” Rogerson said. “He is in the Derby.”

Team Rogerson will also be represented in the Thorndon Mile by Contessa Vanessa, who finished 12th in the Gr.2 Rich Hill Mile (1600m) at Ellerslie on New Year’s Day.

“I just don’t know whether she just had an off day or what it was, or if she was in season,” Rogerson said. “We will see how she goes on Saturday, she is a good mare.”

Rogerson is looking forward to his trio of sprinters Ferrando, Volks Lightning and Gift Of Power tackling the Gr.1 JR & N Berkett Telegraph (1200m) on the bumper Trentham program.

“You could make a case for all of them,” Rogerson said. “Gift Of Power has won ten races left-handed, Ferrando needs a firm track and Volks Lightning is right up there with them and just needs luck in running. I think it is a very good field the Telegraph.”

New Zealand Oaks aspirant Sure Bet will step out in the Gr.3 Williment Travel Group Desert Gold Stakes (1600m) with the daughter of Reliable Man having been off the scene since August.

“She was growing, so I put her away to get her ready for the Oaks. Ryan (Elliot) rides her and she has got good ability. She ran in the Taranaki Challenge and had no luck.”

Meanwhile, Rogerson is once again likely to be a strong player at the New Zealand Bloodstock Yearling Sales which commence on January 27 at Karaka and believes a stallion whom he trained to multiple Group One success will be a major drawcard for buyers.

“I expect to be active at Karaka for sure. I think the Savabeels will be the making of the New Zealand sales. He has done a wonderful job.” – NZ Racing Desk